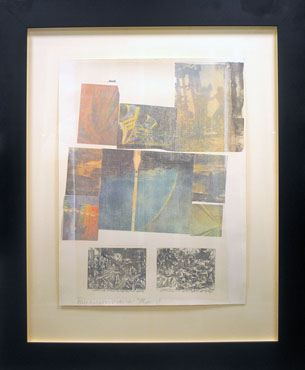 In the Hobart and William Smith Collections, we have

Robert Rauschenberg (1925-2008)
People Have Enough Trouble without Being Intimidated by an Artichoke, 1979
Lithograph, 77 x 58 cm.
Gift of the George D. and Freida B. Abraham Foundation
hws-r-6

Born in Port Arthur, Texas in 1925, Robert Rauschenberg imagined himself first as a minister and later as a pharmacist. It wasn’t until 1947, while in the U.S. Marines that he discovered his aptitude for drawing and his interest in the artistic representation of everyday objects and people. After leaving the Marines he studied art in Paris on the G.I. Bill, but quickly became disenchanted with the European art scene. After less than a year he moved to North Carolina, where the country’s most visionary artists and thinkers, such as Joseph Albers and Buckminster Fuller, were teaching at Black Mountain College. There, with artists such as dancer Merce Cunningham and musician John Cage, Rauschenberg began what was to be an artistic revolution. Soon, North Carolina country life began to seem small and he left for New York to make it as a painter. There, amidst the chaos and excitement of city life Rauschenberg realized the full extent of what he could bring to painting. Rauschenberg’s enthusiasm for popular culture and his rejection of the angst and seriousness of the Abstract Expressionists led him to search for a new way of painting. He found his signature mode by embracing materials traditionally outside of the artist’s reach. He would cover a canvas with house paint, or ink the wheel of a car and run it over paper to create a drawing, while demonstrating rigor and concern for formal painting. By 1958, at the time of his first solo exhibition at the Leo Castelli Gallery, his work had moved from abstract painting to drawings like “Erased De Kooning” (1953) (which was exactly as it sounds) to what he termed “combines.” These combines (meant to express both the finding and forming of combinations in three-dimensional collage) cemented his place in art history. As Pop Art emerged in the ’60s, Rauschenberg turned away from three-dimensional combines and began to work in two dimensions, using magazine photographs of current events to create silk-screen prints. Rauschenberg transferred prints of familiar images, such as JFK or baseball games, to canvases and overlapped them with painted brushstrokes. They looked like abstractions from a distance, but up close the images related to each other, as if in conversation. These collages were a way of bringing together the inventiveness of his combines with his love for painting. Using this new method he found he could make a commentary on contemporary society using the very images that helped to create that society. From the mid sixties through the seventies he continued the experimentation in prints by printing onto aluminum, moving plexiglass disks, clothes, and other surfaces. He challenged the view of the artist as auteur by assembling engineers to help in the production of pieces technologically designed to incorporate the viewer as an active participant in the work. He also created performance pieces centered around chance. Throughout the ’80s and ’90s Rauschenberg continued his experimentation, concentrating primarily on collage and new ways to transfer photographs. In 1998 The Guggenheim Museum put on its largest exhibition ever with four hundred works by Rauschenberg, showcasing the breadth and beauty of his work, and its influence over the second half of the century. Rauschenberg lived and worked in New York City as well as on Captiva Island, Florida until his death from heart failure on May 12, 2008.

Project ARTICHOKE (also referred to as Operation ARTICHOKE) was a CIA project that researched interrogation methods and arose from Project BLUEBIRD on August 20, 1951, run by the CIA’s Office of Scientific Intelligence.A memorandum by Richard Helms to CIA Allen Welsh Dulles indicated Artichoke became Project MKULTRA on April 13, 1953. The project studied hypnosis, forced morphine addiction (and subsequent forced withdrawal), and the use of other chemicals including LSD, to produce amnesia and other vulnerable states in subjects. ARTICHOKE was a mind control program that gathered information together with the intelligence divisions of the Army, Navy, Air Force, and FBI. In addition, the scope of the project was outlined in a memo dated January 1952 that stated, “Can we get control of an individual to the point where he will do our bidding against his will and even against fundamental laws of nature, such as self-preservation? 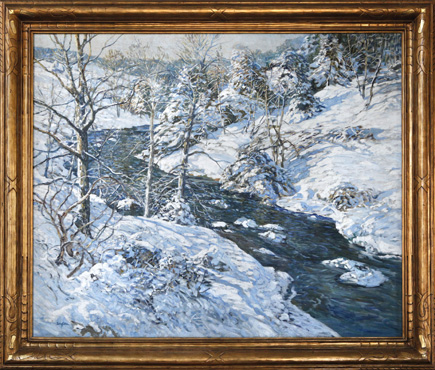 Schofield’s Morning has been on loan to two museums in Pennsylvania since September 2014. As it returns to us this morning, I am inspired to tell you a little about Schofield and his lovely painting in the Collections.

Morning is the largest of a group of winter landscapes Schofield produced in the early 1920x. The composition is closely related to Morning Light which was shown at the Buffalo Fine Arts Academy in 1922-23 and purchased directly from the exhibition by the French government. It was first placed in the Musée du Luxembourg.

Walter Elmer Schofield was born in Philadelphia in 1867. He attended Swarthmore College and the Pennsylvania Academy of the Fine Arts, studying with Thomas Anschutz from 1889 to 1892. He then traveled to Paris where he studied at the Academie Julian from 1892 to 1895, and in 1903 he eventually settled, along with his wife Murielle Redmayne and their children, in Cornwall, England. Although he became an expatriate, Schofield was recognized an a part of the Pennsylvania Impressionist tradition. Familiar at an early age with the Bucks County region, Schofield visited often, usually from October through April, and painted rural scenes. He often visited his friend, Edward Redfield, and painted with him en plein-air, sharing a love of large canvases. A rivalry ended their friendship, however, when Schofield earned a Carnegie Institute medal for his Center Bridge – Across the River in 1904, a painting he put to canvas while in Cornwall. Redfield claimed the composition was initially his own concept and that Schofield stole it. It has been said that from that point on Schofield was never known to have painted in the Bucks County region again. Schofield won many awards during his lifetime, including two gold medals from the Pennsylvania Academy of the Fine Arts, three awards from the National Academy of Design, and the National Arts Club among many others. His work is in the permanent collections of some of the worlds most prestigious institutions including the Metropolitan Museum of Art, Corcoran Gallery of Art, the Pennsylvania Academy of the Fine Arts, the Luxembourg Museum in Paris, James A. Michener Art Museum and the National Museum of American Art at the Smithsonian Institute, among others.

The Colleges have in its Collections four prints from the series Thirty-six Views of Mt. Fuji by Ando Hiroshige.

Hiroshige was born in 1797. He had, almost from infancy, displayed his inclination towards art; and his father had already arranged for him to have lessons from a friend and neighbor, an amateur painter named Okajima Rinsai. In his fifteenth year he desired greatly to become a pupil of Toyokuni but the studio of the great man could not accommodate him and he joined that of Toyohiro. Here he progressed so rapidly that within the short space of a year his master formally admitted him to membership of the Utagawa fraternity. Hiroshige did not immediately begin to produce landscape prints. Up to about 1830 his main output consisted of prints of beautiful women (bijinga) and actors (yakushae). Landscape prints, which had been out of favor for some years, was returning to popularity and received a boost from the publication of Katsuchika Hokusai’s ‘Thirty-six Views of Mount Fuji’. Hiroshige became aware of the possibilities and around 1826 he released the series ‘Famous Views of the Eastern Capital’, a simple landscape series which illustrated the various sites in Edo. At the same time, Hiroshige was also producing prints of birds and flowers. For these works he used principally a long compositional format. During the late 1840’s and early 1850’s, over production took its toll of artistic quality. Hiroshige’s works became mediocre and repetitive. Hiroshige also produced a number of nikuhitsuga (ukiyoe paintings) in his later years. Hiroshige died in 1858, two years after his retirement, during a cholera epidemic and is buried in a Zen temple in Asakusa, Tokyo.