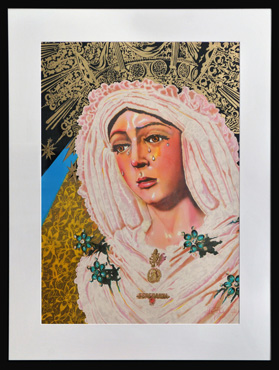 Audrey Flack holds a graduate degree and an honorary doctorate from Cooper Union in New York City, and a Bachelor of Fine Arts degree from Yale University. She attended New York University’s Institute of Fine Arts where she studied the history of art. She was awarded the St. Gaudens Medal from Cooper Union, and the honorary Albert Dome professorship from Bridgeport University. She is an honorary professor at George Washington University, and is currently a visiting professor at the University of Pennsylvania. Audrey Flack has taught and lectured extensively both nationally, and internationally. A pioneer of Photorealism and a nationally recognized painter and sculptor, Ms. Flack’s work is in the collections of major museums around the world, including the Metropolitan Museum of Art, The Museum of Modern Art, the Solomon R. Guggenheim Museum, and Whitney Museum of American Art and the National Museum of Art in Canberra, Australia. She was the first photorealist painter to have work purchased by the Museum of Modern Art. Audrey Flack lives and works in New York City and Long Island.

This same sense of the beyond extends into her subject matter as well, with images of religious icons mixed with a pop sensibility. One of her most haunting works is the “Macarena Esperanza,” which is represented in this show with a lithograph of the original oil painting she did in 1971. The Macarena, the patron saint of Seville, Spain, is memorialized in life- size statue that stands in a small Seville church. The statue had a profound effect on Flack when she first saw it in 1970. Executed by the artist Luisa Roldan in the 17th century, it is a hallmark of the Spanish Baroque style. The polychromed wood technique that “La Roldana” was famous for fit in perfectly with Flack’s own personal vision, being the three-dimensional equivalent of the glossy effect given by the airbrush. Flack’s version, like the original, shows the saint in a state of mourning, with large tear drops falling down a face so smooth it appears to made of colored glass. She is ornately adorned, almost to the point of gaudiness, with a towering golden headdress, flowing robes of white lace and an abundance of gold accessories.

In the Collections of Hobart and William Smith Colleges, we are fortunate to have two works by Tobey:

The American painter, poet and composer Mark Tobey was born in Centerville, Wisconsin on December 11, 1890. As of 1906 he studied watercolor and oil painting at the Art Institute in Chicago. Afterwards, he worked as a model drawer in Chicago and as of 1911 in New York. In 1918 Mark Tobey converted to Bahaism, this Persian belief seems to have had a great impact on both his life and his art.  From 1922 to 1925 he worked as an art teacher at the Cornish School in Seattle. He was very interested in European Cubism and East Asian painting and calligraphy. He collected the art of the Tlinkit and Haida Indians, especially textiles and wooden sculptures.  In 1925 Mark Tobey traveled to Europe and stayed in Paris for some time; he also visited Barcelona, Athens, Istanbul and Beirut, went onto a pilgrimage to the holy site Bahá’í in Haifa, and also visited Akka to learn more about Persian and Arabian calligraphy.  His first one-man show took place in Chicago in 1928. From 1930 to 1937 he taught at the Dartington Hall School in Devonshire, England. His journeys played an important role in Tobey’s life. In 1932 he went to Mexico and in 1934 to China and Japan – where he dealt with the teachings and paintings of Zen, haiku poetry and also calligraphy in a monastery in Kyoto.  The effects of these journeys can be observed in his works. The artist returned to the U.S. in 1937 because of the changing political situation in Europe. He lived in Seattle until 1960. He made his first music compositions as of 1938. In 1944 the Willard Gallery in New York showed his “White Writings” pictures for the first time; this exhibition marked his artistic breakthrough. Tobey covered the image carrier with many layers of white or a similarly light color – this is the beginning of the “all over” painting, a style that is also applied by other artists such as Jackson Pollock. Mark Tobey’s works became more and more abstract and complied with the artist’s meditative and contemplative lifestyle.  Mark Tobey’s works were shown in the 1959 and 1964 Documenta exhibitions in Kassel and in numerous other exhibitions all over the world. He was one of the most important precursors of American Abstract Expressionism. The Smithsonian Institution in Washington held his first retrospective in 1974.  Mark Tobey moved to Basel in 1960 where he died on April 24, 1976. Tobey produced most of his prints in the years just before his death, from 1973-1975. These include a number of lithographs and etchings.

The Davis Gallery accepts submissions for exhibitions from emerging and established artists in all media: painting, drawing, printmaking, sculpture, photography, digital art and mixed media. All artwork submitted is reviewed by our gallery. The deadline for proposals is February 1st of each year.

The exhibition proposal should address the following:
1. A general explanation of the quality of the art proposed
2. A statement of why you believe this show would be relevant to our community in terms of content and timing
3. A detailed list of times and dates (if any) for which you would like staff and student help in installation and taking down the exhibition

The following materials must accompany this proposal:
Exhibition Prospectus packages should include the following:
• Cover letter
• Biographical materials (resume, CV, proposal/description of work, artist statement)
• Press reviews, tear sheets, past postcard announcements, websites, etc.
• 5 or more high resolution images (Images should represent a sampling of your current artwork)
• All materials should be labeled with all pertinent information
• Include a Self-addressed stamped envelope (SASE) for return of materials

The Edo period is the period between 1603 to 1868 in the history of Japan when Japanese society was under the rule of the Tokugawa shogunate and the country’s 300 regional Daimyo. The period was characterized by economic growth, strict social orders, isolationist foreign policies, an increase in both environmental protection and popular enjoyment of arts and culture. The flourishing of Neo-Confucianism was the major intellectual development. This system of thought increased attention to a secular view of man and society. The ethical humanism, rationalism, and historical perspective of Neo-Confucian doctrine appealed to the official class.

A chawan is a bowl used for preparing and drinking tea. There are many types of chawan used in tea ceremonies, and the choice of their use depends upon many considerations. Chawan are classified according to their place of origin or manufacture, color, shape, materials and other characteristics. Chawan are also classified according to the type of tea that will be served in them. Although the Japanese word for the tea ceremony, chanoyu, literally means “hot water for tea,” the practice involves much more than its name implies. Chanoyu is a ritualized, secular practice in which tea is consumed in a specialized space with codified procedures. The act of preparing and drinking matcha, the powdered green tea used in the ceremony, is a choreographed art requiring many years of study to master. When presented with a bowl of tea, a guest will notice and reflect upon the warmth of the bowl and the color of the bright green matcha against the clay before he begins to drink.

Raku ware is a type of Japanese pottery that is traditionally used in the Japanese tea ceremony, most often in the form of tea bowls. It is traditionally characterized by being hand shaped rather than thrown; fairly porous vessels, which result from low firing temperatures; glazes; and the removal of pieces from the kiln while still glowing hot. In the traditional Japanese process, the fired raku piece is removed from the hot kiln and is allowed to cool in the open air or in a container filled with combustible material.

In the Collections of Hobart and Williams Smith Colleges, you will find four photographs by Porter.

Zorn was born in Yvraden, a hamlet in the village of Utmeland in the parish of Mora, Dalarna, and was raised on his grandparents’ farm in Yvraden. He began to study at the age of twelve in the school at Mora Strand before progressing during the autumn of 1872 to a secondary grammar school in Enköping. From 1875–1880, Zorn studied at Royal Swedish Academy of Arts in Stockholm, Sweden. He traveled extensively to London, Paris, the Balkans, Spain, Italy and the United States, becoming an international success as one of the most acclaimed painters of his era. While his early works were often brilliant, luminous watercolors, by 1887 he had switched firmly to oils. Zorn painted portraits as well as scenes depicting rustic life and customs. Zorn is also famous for his nude paintings and realistic depictions of water. It was primarily his skill as a portrait painter that gained Zorn international acclaim based principally upon his incisive ability to depict the individual character of his model. His subjects included three American Presidents, one of whom was Grover Cleveland in 1899 and William H. Taft and Theodore Roosevelt. At 29, he was made Chevalier of the Légion d’honneur at the Exposition Universelle 1889 Paris World Fair.