The purpose of this exhibition is to highlight the varied interests of the Department of Art and Architecture and demonstrate the ties of the department to the collection. The essays of the members of the art department on their choices demonstrate an intellectual bent either personally or professionally. It is designed, in particular, for visitors to see a number of mini-exhibitions within an umbrella of the art collection. Think of it as a type of tiny biennale – with members of the department as the countries participating.

The significance of the context is the tenth anniversary of The Davis Gallery at Houghton House and this exhibition should be a fitting celebration of the gallery and the department as well as the art collection. The exhibition will determine what, if anything, is specifically poignant about the relationship of the Department of Art and Architecture and The Collections of Hobart and William Smith Colleges.

Members of the department chose artwork for various reasons from the personal to the professional: their work with students, their art, their writing, and intimate responses to the pieces chosen. Art is never created or appreciated within a vacuum. It is made and seen within a tradition with the techniques and resources available within that tradition. Social, historical and artistic contexts are all important for both the artist and the viewer.

For Professor Lara Blanchard, the works chosen combine her love of painting and writing as expressed in the calligraphy of the works she chose. “For an art historian, one of the great advantages of studying Chinese painting is the quantity of writing it inspires. This is the case with one of the Chinese paintings in the Colleges’ Art Collection, a vertically oriented landscape by the artist and art historian Chiang Chao-shen 江兆申 (1925–96), made in 1980, of a type that in earlier eras might have been mounted as a hanging scroll.”

“In my course on the ‘History of Modern Landscape Architecture,’ I lecture on themes that are embodied by my two choices for this exhibition: respectively, the Hudson River School of landscape painting and its relationship to the emerging urban parks movement in nineteenth century America, and how early Parisian modernists were actively representing the entire city as a landscape.” Professor Jeffrey Blankenship ties the works he chose directly to the courses he teaches at the Colleges.

Another reason for choosing particular works is the effect the artist and the artworks has had on the personal work such as that of Professor Michael Bogin. “Carl was a friend of mine, and once visiting my studio he gave me the painting advice to “throw it off.”  He felt that some of my images were not active enough in the rectangular field of the painting.  In the two of his works owned by the Colleges, we can see how subtly Carl followed his own advice. “

Professor Nicholas Ruth’s choices were intensely personal and aesthetic.
“My selections for this show are based on gut reaction.  I tried to pick things that hit me, that move me to feel something and see things in a new way.  As someone who by profession is constantly thinking and talking about art, I like to remind myself of the strange, direct, and deep power and pleasure of experiencing a work of art.” Professor Angelique Szymanek had a similar response to her choices. “The first time I referenced Kollwitz’s “Death, Woman, and Child” in a classroom, the emotional response that welled up inside me as I explained the content of the work to students took me by surprise.” “Spero and Golub’s work is one of my favorites in the Davis collection because it embodies the qualities that, for me, make a work of art great: the imperative to image that which we might prefer to ignore, and the call for art to engage and implicate its viewers in the atrocities that mark everyday life. “

Shengyuan Tong (William Smith 2018) selected a piece which combined what she learned as a student at the Colleges with her background. “I chose this piece of painting not only because of my personal preference of ukiyo-e but also due to the gap between western and eastern culture. Art pieces are always the best representation of cultural ideologies. Trying to understand a culture different from the one we grow up can always help us have a better understanding our own culture.”

As for me, I decided to make my chosen artwork reflect some of the many ideas and visions I have fostered throughout my time at the Colleges. “It was hard choosing these few works from the whole – I left out so many I know and love. I am also an introvert and it is hard for me to face you with my personal opinions. On the other hand, if not now, when? I am leaving the Colleges at the end of this year and so this is my farewell ‘speech’.”

All of us hope you will have as much enjoyment seeing these works and reading about them from the perspectives of the authors as we have had choosing them and writing about them. 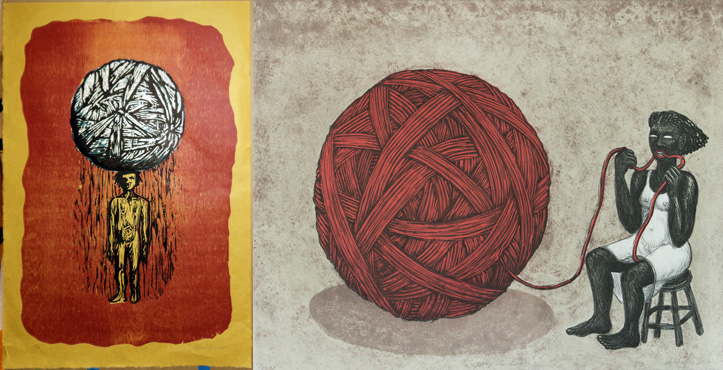 African-American artists, like women artists or gay artists, often find themselves in the dubious position of representing a group with their work, whether or not it is their intent to do so. Saar tackles the issues of race directly while incorporating issues of gender.

Alison Saar was born in Los Angeles, California in 1956 and grew up in Laurel Canyon, California. Her parents were Betye Saar, a well-known African American artist, and Richard Saar, an art conservationist. She received a BA from Scripps College, Claremont, in 1978, having studied African and Caribbean art. She received an MFA from Otis Art Institute, Los Angeles in 1981. Her sculptures and installations explore themes of African cultural diaspora and spirituality, and her studies of Latin American, Caribbean and African art and religion have informed her work. Saar’s fascination with vernacular folk art and ability to build an oasis of beauty from cast‐off objects are evident in her sculptures and paintings. Saar’s highly personal, often life-sized sculptures are marked by their emotional candor, and by contrasting materials and messages that imbue her work with a high degree of cultural subtext. Alison Saar isn’t known first and foremost for her work in printmaking. The sculptor will frequently create post-sculptural studies of her 3D works, which is not common, but allows her to further meditate on the concepts she’s working with. For example, Saar’s work Inheritance is after a sculptural work by the same title, with very similar imagery of a young Atlas figure standing with a massive cloth bundle on her head.

The young girl carrying a large ball of white cotton cloth on her head is a portrait of the artist’s mother. When Betye was just four years old, her father called her to his deathbed to make a final request: would Betye promise to take care of her mother and her siblings when her daddy was gone? The enormous ball represents the weight of the world, making the young girl who carries it a “child Atlas.” Saar and her mother have traveled to Senegal together, where they saw children who do carry the weight of the world on their heads every day. Their observation of this painful situation recalled Betye’s childhood and suggested the concept for the piece.

Titled Coup, a related sculpture shows the seated figure of an African American woman with a long braid of hair attached to a pile of old luggage behind her. In her hands, she holds a pair of scissors, implying that she is about to rid herself of her baggage. Many who commented on this work saw in it an impending act of self-deliverance. Your baggage is who you are and what you have to negotiate in order to find ground for your subjectivity. The fantasy of cutting yourself off from it can never be realized. It would amount to a psychic coup de grâce. It exists as a fantasized possibility only to protect you from the harrowing awareness of its impossibility. Coup de Grace is the printed version of this same exploration. The ball of yarn relates it to the burden carried in Inheritance adding layers of the personal. 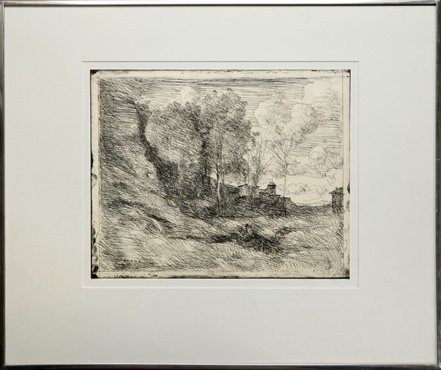 Jean-Baptiste-Camille Corot was born on July 26, 1786 in Paris. He grew up in a middle-class family in Rouen, where he was a draper’s apprentice. At the age of 26 he gave up his unloved job to pursue a career as an artist. In 1822 Corot took painting lessons from his successful contemporaries A.E. Michallon and Victor Bertin, who ran a school for landscape painting in the tradition of Poussins.  During his studies under Bertin, Corot painted his first landscapes. When he traveled to Italy after his studies, he continued to perfect his skill of lending his pictures an unusual clarity and transparency. Having returned to Paris, he processed the impressions from his Italian trip, remaining untouched by the public arguments between Romantic and Classicist painters. From 1831 Jean-Baptiste Camille Corot held regular and very successful exhibitions at the Paris salons. From the late 1940s he was in close contact with the painters of Barbizon, among whom he was particularly close to Daubigny. From 1850 various landscape painters gathered around Corot, as he was moving further away from an academic faithfulness to detail towards a more liberal style with a stronger sense of atmosphere. The ease in which he painted stems from his intensive studies on the effects of light, which are reflected in the very fine shades of his pictures, seeming to anticipate numerous Impressionist stylistic devices. When Corot suffered from gout, he gradually had to give up landscape painting. Corot’s late phase was dominated by portraits of women, which he painted in a confident and liberal style. On February 22, 1875 Jean-Baptiste Camille Corot died in Ville d’Avray.

Qian Long was the sixth emperor of the Manchu-led Qing Dynasty, and the fourth Qing emperor to rule over China proper. The fourth son of the Yongzheng Emperor, he reigned officially from 11 October 1735 to 8 February 1796. On 8 February, he abdicated in favor of his son, the Jiaqing Emperor – a filial act in order not to reign longer than his grandfather, the illustrious Kangxi Emperor.  Despite his retirement, however, he retained ultimate power until his death in 1799. Although his early years saw the continuation of an era of prosperity in China, his final years saw troubles at home and abroad converge on the Qing Empire. The Qianlong Emperor was a major patron of the arts, seeing himself as an important “preserver and restorer” of Chinese culture. He had an insatiable appetite for collecting, and acquired much of China’s “great private collections” by any means necessary, and “reintegrated their treasures into the imperial collection.”

Pottery in this period is widely different, stretching the limits of what was possibly to make. It imitated everything previously done with all kinds of materials. Skilled craftsmen produced magnificent copies of earlier masterpieces. Overall floral scroll designs characterize the wares of this reign. The paste is dead white. Chinese porcelain became a standard article in wide use in Europe. Huge amounts of dinnerware (dishes, soup tureens, huge flats dishes, salad bowls, etc.) were exported to Europe in shapes and with decorations designed in Europe, often in a “Chinese” style – called Chinoiserie.